How the big banks could change the superannuation landscape

The Federal Government is proposing changes to the way super funds are run that could have a big impact on the industry. But will these changes benefit super funds owned by the big banks at the expense of the not-for-profit super industry – potentially leaving members worse off?

Superannuation policy is a complex subject that people often find difficult to understand. Here’s a guide to give you an idea of how these changes could affect you, and whether you’ll be better or worse off if they go ahead.

Australia’s superannuation system is consistently regarded as one of the best in the world. At the moment, the law says employers must pick a default super account for new workers who don’t pick one themselves. The Fair Work Commission applies a quality filter to shortlist super funds for employers to choose from, most of which are not-for-profit industry funds that often outperform their retail and bank-owned competitors.

Industry super funds are typically run by a mixture of representatives from employer groups and unions, which don’t earn a profit and act in the interests of their members, unlike bank-owned funds, which also generate corporate profits which are returned as dividends to shareholders, not super fund members. Super contributions are also classed as compulsory workplace entitlements, which ensures that all working Australians can access super as a right, not as a luxury.

The major banks are lobbying the government to make changes to superannuation laws so that banks can get access to more workers super. The government is preparing to act on the banks wish list including changing the boards of industry super funds so they are run more like bank-owned funds, and are looking to remove the default protections that ensure workers who don’t choose a super fund are put in a high-performing fund. 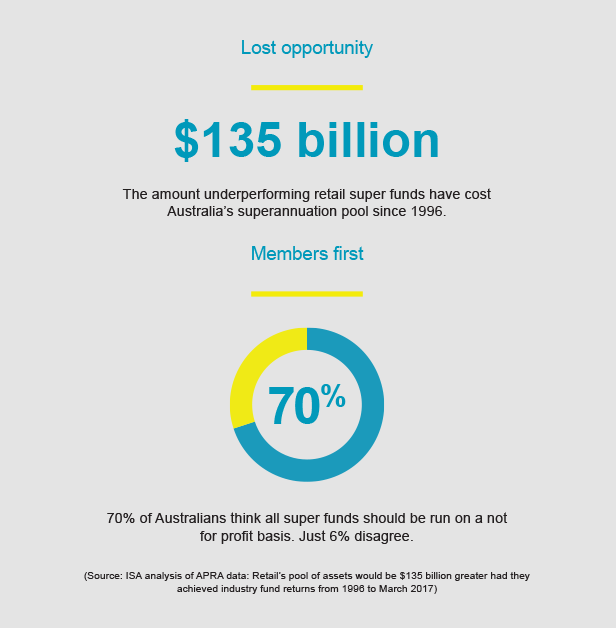 So are these changes necessary? The numbers consistently show not-for-profit industry super funds on average, provide greater returns for members and are more trusted by the public than for-profit funds run by major banks. People are especially supportive of super funds being run in the interests of their members rather than for a profit motive, and are concerned about any efforts to reduce superannuation from a workplace entitlement to just another part of the finance sector.

People are also very wary about giving Australia’s largest banks even more control over their financial affairs. As banking profits and executive bonuses have reached extraordinary highs, public confidence in the big banks has plummeted. Even in the face of overwhelming public support for a royal commission into the banking sector, the government is considering reforms that would allow the banks to get their hands on more workers super. 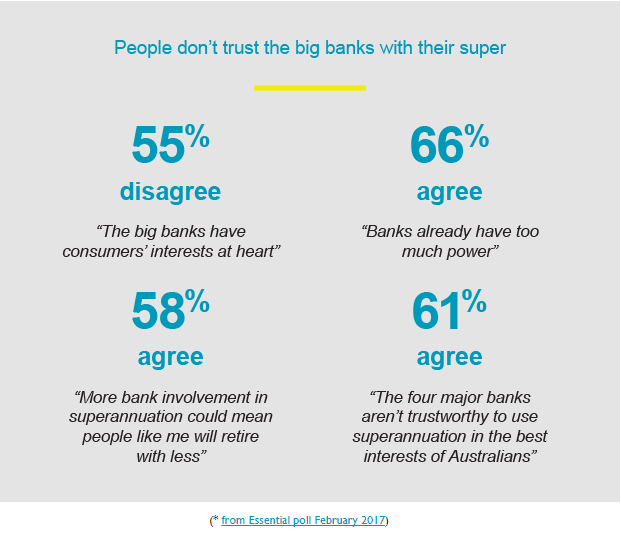 Super is for your future. Not to help the banks generate profits.

This content was created by Guardian Labs as part of a partnership with Industry Super Australia, and published on 2 August 2017. The information referred to may change from the date of publication and care should be taken when relying on such information.