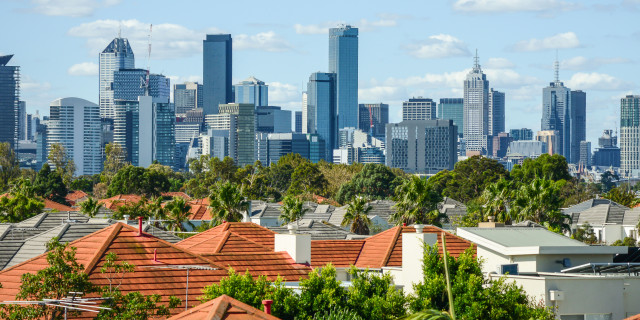 It's time to get banks back to nation-building basics

Public confidence in Australia's banks has been steadily eroding since financial deregulation in 1983 to the point where now the brand of the Big Four banks, and especially the Commonwealth Bank, is at its nadir.

It appears Australia's banks are more satisfied with earning a fast buck than supporting real investment in projects and jobs for the betterment of all Australians.

Somewhere along the line, successive Australian governments, the Reserve Bank, regulators, and the institutions themselves have forgotten that banks do not exist to facilitate speculation by investors via the use of tax subsidised debt.

The flip side of their regulated 'public utility' sinecure and too-big-to-fail status should be a broader social licence that requires banks to always act in the national interest.

Right now the bank business model is fairly simple. Make as much profit as you can, maximise short-term shareholder value by incentivising executives with bonuses whilst telling Australians the spoils will trickle down to them.

Banks these days compete on both sides of the balance sheet. They offer depositors and bondholders a sufficiently attractive rate of return to attract funds. They take these funds and turn each dollar into up to $7 of loans (where regulated risk weights bias investors towards existing housing assets). They then offer clients ancillary services (investment advice, insurance, and retirement products) to clip the ticket multiple times.

Historically, the business model of Australian banks was very different. It was to prioritise the efficient intermediation of capital to businesses, prioritise first home-ownership and assist macroeconomic management via reaching liquidity objectives in times of crisis.

This old-fashioned view of banking – as a provider of basic services – shares many of the same characteristics as a public utility like energy, water, sewerage. These are services that all households and businesses require, where quality is hard to observe, and some sort of regulatory control is often needed to prevent the abuse of power.

When financial deregulation finally came in late 1983, the sector was handed over to the "money changers" for consolidation. Whilst the housing loan book became their main game, it became useful to play up the ancillary services more directly.

Vertical integration became a deliberate strategy to move the oligopolistic competition in loans up and down the household value stream: i.e. into the payments system (credit cards), risk (life insurance and CCI), and funds management (super and trading). And where supply networks are captured (mortgage brokers, branch networks, financial advice) – a sales culture dominates, flogging product, regardless of the underlying needs of customers.

Bank executives have apparently revelled in raising short-term shareholder value whilst maximising their own compensation. They have become oblivious to any notion of stewardship to their front-line employees, much less the community.

Bank shareholders have mostly had a wonderful run but may still live to regret the lack of oversight of current and past managers. The diverse nature of the major banks throws up internal efficiency issues. These banks are bureaucratic, slow, cumbersome, and have poor internal information and systems.

They are rife with infighting around internal targets and staff performance measures and it leads to dysfunctional decision making.

Certainly, Australia authorities must deal with structural issues in foundation financial institutions like monopoly, economic rents, cross-subsidisation between industry segments and near daily allegations of corporate misbehaviour, with the money laundering scandal at CBA being the last straw.

They must break the hold of connected dealer groups or advisory networks on relevant market shares. The priority must be to clean up the mess, refocus the sector back on core functions at least via the structural separation of various business lines.

A bold policy would be to establish a not-for-profit (public or mutual) bank, which provided home loans on a cost recovery basis, passing the benefits of scale on to the community.

This piece first ran in the Sydney Morning Herald - August 30 2017.